I woke up the day of the Springsteen Albany show in a strange funk.  I was down, down, down, even though I was going to see my favorite performer for the 22nd time. Late morning, after a workout didn’t clear my head, my daughter Sarah calls. She never calls during the day but happened to be working from her home in Boston waiting to go to a doctor’s appointment.

As she always does, my 23-year-old pal cheered me up. And she was right that I was in for a wonderful day. As the day progressed it got better and better and better. I went from a strange low to a crazy high, with an incredible twist, and ending — like all Bruce days on this River tour so far — in a “Shout.”

Soon after Sarah’s phone call, I tweeted “Happy Bruce Day” #RiverTour2016 #Albany and things got rolling. My phone was buzzing with re-tweets and text messages. Where are we meeting before the show? Do you have GAs? Well, after two terrific GA experiences in Albany in May 2014 and Pittsburgh in January, I didn’t buy GAs this time. My husband and I bought two blocks of 18 tickets for family and friends. We thought we needed a second mortgage at one point to float the tickets until I collected the payments.

The Pittsburgh show — where I was awarded a coveted spot in the pit to Bruce’s left — was so fresh in my mind I knew the show wouldn’t be the same from the seats. And I knew the audience in the seats would be annoying and sitting down. That was part of my morning pre-show funk, because in my hometown, of all places, I needed an upgrade!

I texted my older sister, who was going to the concert with her daughter and son-in-law. I told her jokingly in a text that if she gets in the pit (the trio secured a spot in the pit in Albany 2014 and we just missed the cut) she is not worthy to dance with Bruce and instead needs to bring an envelope with a note in it explaining that I’M BRUCE’S BIGGEST FAN.

Well, she didn’t get in the pit, but she got in the center of the catwalk. Meanwhile, I was able to get last-minute GAs and wound up in the pit, again to Bruce’s left.  I didn’t take too many photos this time, I just enjoyed the show, shot a few videos, and got this sweet picture of Jake:

So I wound up close to the stage and my niece texted me that my sister did write a letter and she was going to give Bruce the envelope. Sure you are.

Well, on his second trip on the catwalk during “I’m A Rocker” I could see her on the screen waving the letter. Bruce grabs it and does a terrific Carnac impression as well.

He had it in his back pocket for a nine songs, there’s a YouTube video of him taking it out and leaving it by Max’s drums at the start of “Backstreets.”

So what was in the note? Well, as I stated in my “Be The Boss” segment taped this week and on E Street Radio SiriusXM next week, if I had known he was going to grab it I would have helped my sister write something a little more creative — or a least included an email address or phone number. 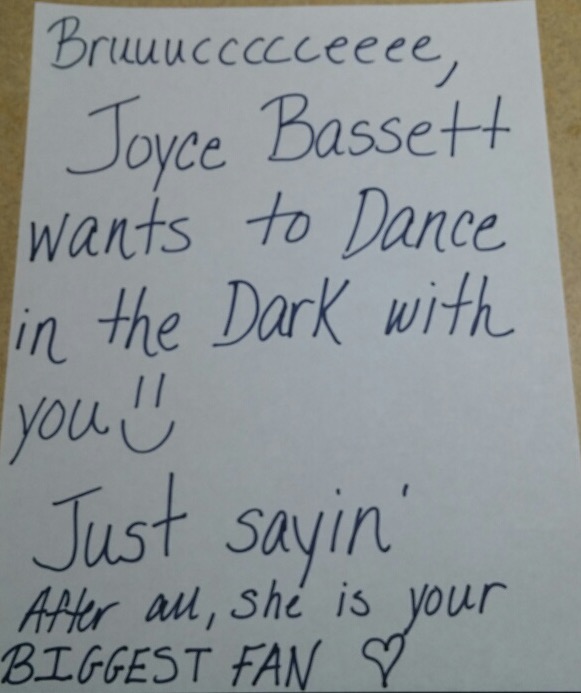 Ok, so it’s a pretty lame note, meant for him to be read quickly on stage. I had my ID ready in case he opened it and wanted to invite me backstage with the checkered shirt guy from Backstreets.com, Steven Strauss.

It was an emotional day, filled with a monumental rise from sadness to delight. From the review by the checkered shirt guy:

And this brings me back to Bruce’s dedication before “Be True” to “our special friends.” I couldn’t help but think he was talking to the diehards, whom he’s clearly playing the outtakes for, but he hasn’t fully figured out how to best fit them in yet. As such, he directed “Be True” to all of us — if we stick with him as he figures out the best way to vary up the post-River part of the show, he’ll be true to us by continuing to play more and more rarities.

P.S. When I got into work the next day, my sister and her niece were featured on timesunion.com, where I work, promoting a fan photo gallery from the show the night before, and with the famous letter.

A Troy, NY, native. Walked to my first Springsteen concert in 1978 at Rensselaer Polytechnic Institute Field House in Troy. Executive News Editor at the Albany Times Union. Loves writing about Springsteen, sports and golf. View all posts by Joyce Bassett

Springsteen in New JerseyAugust 30, 2016
Countdown to my third show of the River tour!